Many adults can remember the Godzilla of their youth. In the show about the monster, the popular creature would often battle other monsters and while he was destructive to buildings and other things as he’d sweep his tail around, we also saw Godzilla as a hero of sorts. The creature has now seen a rebirth in the new movie that bears his name and features a host of talented actors and actresses.

The old and new popularity of the creature is why the Godzilla Halloween costume is such a fast selling item. 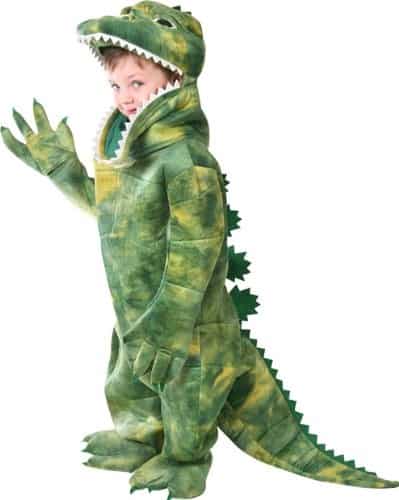 For the little ones who desire to act as Godzilla when they’re going after Halloween goodies, there’s a perfect Godzilla Halloween costume for them. This costume is made of foam and it’s padded so it’s super comfortable and warm as well.

It has green feet shoe covers that look just like Godzilla’s feet and gives a sense of realism to the costume. One of the things that parents like about this costume is that the Godzilla mask features an open mouth. This enables a child to be able to see easier so less likelihood of tripping and falling.

The lizard-like hands of the costume are attached so those aren’t separate gloves. The tail is also attached and has padding so it has that full look unlike some tails that tend to look a little withered.

Kids aren’t the only ones that get a kick out of dressing up like this character. Adults enjoy it too and just like the kid costume, this adult version features identical stuffing and design except of course, it’s a larger size.

Some people want to choose their own Godzilla body suit and if you can sew, that’s not a bad idea. However, if you’re looking for a realistic version of Godzilla’s face, you’re going to want to buy one.

There are some really good, realistic looking masks that you can buy.

One of them is the head and neck of Godzilla and it’s done in the color like you see in the movie. It’s made out of sturdy latex and a lot of artistic attention was paid toward getting the details right.

The outside of the mask has the same ridges and bumps that Godzilla has. It also has the same half-lidded eyes with the lines between them that give the creature his ferocious look.

The mouth of the mask is slightly open and you can see a peek of the tongue. But up front are the white, razor sharp teeth.